We’re thrilled to announce that our latest title The Universal Declaration of Human Rights in the 21st Century: A Living Document in a Changing World was launched on April 18th at the United Nations Headquarters in New York. The report was presented by former British Prime Minister Gordon Brown to the UN Secretary-General Ban Ki-moon, and breaks new ground for human rights in our changing world. This report by the Global Citizenship Commission (GCC) unites global leaders in a call for urgent reform to the human rights architecture of the UN, and explores what it means to be a global citizen in modern society.

Returning to the 1948 Universal Declaration of Human Rights, this report is published amidst global upheaval. It pays particular attention to the plight of refugees and children in our time.

The current refugee crisis highlights the need for stable and effective human rights laws to treat all people equally. The Universal Declaration of Human Rights in the 21st Century urges world leaders to honour their promises to refugees, and recommends that the international community recognise that asylum seekers have three rights that must not be forgotten:

These three rights in particular ensure that refugees are treated with respect and dignity at all times, which is a fundamental principle of human rights. This report reminds us that we have to work together, as a society, to uphold human rights and to continue to make progress to eradicate human rights violations across the world.

This innovative report also recommends the creation of a Children’s Court at an international level and that the UN Security Council should convene a Children’s Council to provide an annual review on violation of children’s rights. These recommendations go further than any previous report, and focus on an area that has not received enough attention: children’s rights. The Global Citizenship Commission hopes that children will now be afforded the protections that they deserve – and need – to become equal in society. 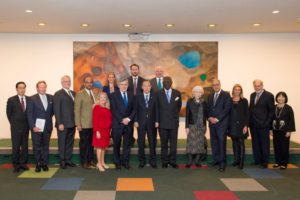 The GCC was convened under the auspices of the Global Institute of Advanced Study at New York University. The Commissioners decided to publish the report in Open Access so that as many people as possible could read and benefit from the recommendations. It is only through greater transparency and education that human rights can develop so that everyone can enjoy the protections, benefits, and freedoms that they bring.

Editor of the volume and convenor of the GCC, Gordon Brown has said:

Since 1948, the Universal Human Rights Declaration has stood as a beacon and standard for a better world. Yet at a time of enormous global change, a refugee crisis bigger than that which accompanied the ending of the Second World War, the increasing twin threats of terrorism and extremism, and the appalling abuse and suffering of women and children in conflict and other situations, we need to renew and revitalize our efforts to realize the rights articulated in the Declaration.

This report refreshes our understanding of the Universal Declaration of Human Rights, which has dominated human rights thinking since 1948. It reaffirms the fundamental commitments of the UDHR; it proposes ways in which those commitments can be carried forward to meet new challenges.  Above all, it identifies the UDHR as a pillar of our global ethics and our global responsibilities.

Members of the Global Citizenship Commission