Institutional Repositories (IR) have become a staple of most academic libraries. They are generally populated by Electronic Theses and Dissertations (ETDs
)and faculty peer-reviewed manuscripts, also known as post-prints in the parlance of green open access.

The IR managed by Western Libraries at The University of Western Ontario, Scholarship@Western, aspires to host the complete intellectual output of the institution.  It is the home to faculty articles, working papers, over 25 open access journals, as well as several conference proceedings, and some digitized materials  such as photographs,  music scores, and historical university course calendars.

The inclusion of  electronic theses and dissertations are a considerable boon to the IR, as they recently achieved just over 2 million downloads worldwide and are one of the best drivers of web-traffic to the repository. 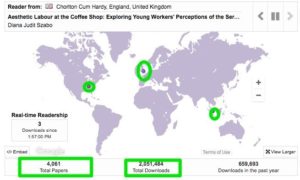 The benefits for students are many, but the most compelling benefit is a dramatic increase (50-250 per cent) in citation impact. The greater visibility for their work and therefore higher citations counts, means greater impact.  This increased citation rate doesn’t just apply to ETDs but to all kinds of open access publications.

There is often difficulty in getting faculty to participate, for a variety of good reasons, such as, the administrative burden of uploading their work into yet another place, benefits of the IR were unclear and  they may be unsure which version can be hosted by the IR, and ineffective marketing of the significant benefits gained by the author when using the repository.

It is true that repositories have not *yet*completely fulfilled their potential.

“The sciences have typically been more broadminded about OA, and the nature of scientific publishing of articles lends itself to this.” – Kathleen Shearer, COAR

The Humanities, with its tradition of research disseminated in book format–books are often years in the making–seems less inclined to participate in open access, however, the times, they are a changing.

Recently Scholarship@Western, has ventured beyond ETDs and green OA, with the addition of three new e-Books. 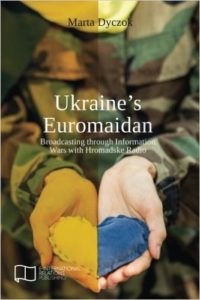 Our first book, Ukraine’s Euromaidan: Broadcasting through Information Wars with Hromadske Radio by Marta Dyczok, is a study of unfolding current events, so the timely release of information was important. Dr. Dyczok looks at Public Radio Ukraine’s decision “to provide accurate and objective information to audiences – free of state and corporate censorship and any kind of manipulation. . .This book brings together a series of English language reports on the Ukraine crisis first broadcast on Hromadske Radio between 3 February 2014 and 7 August 2015.”

The upload of the book  coincided with Dyczok’s most recent and related project, a photo exhibit titled Faces of Displacement in Ukraine, the preliminary results of  interviews with 70 internally displaced people of Crimea and the Ukraine.

“I would love to publish some select photos in an image gallery in the IR  that would reside alongside this book. My belief is that such a display would add impact to the text and also draw in more readers, helping to shed light on the dramatic facts and the discussions inside Ukraine during the crisis.”

The second publication is a local history book,  How Middlesex County was Settled with Farmers, Artisans, and Capitalists: An Account of the Canada Land Company in Promoting Emigration from the British Isles in the 1830s through the 1850s by Marvin L. Simner. This work is of great interest to local historians and genealogists. Print copies, available at local libraries, are hard to come by and because of the scarcity of this kind of research, libraries typically are reluctant to lend them out to other institutions via inter-library loan. Hosting this book in the repository means that family historians and other interested parties have unfettered access to the research, readily discoverable by internet search engines,  at any time.

Our the third work is a social cultural history never told before, Esprit de Corps: A History of North American Bodybuilding by James Woycke, the first comprehensive history of bodybuilding in North America.  This book reveals how Montreal brothers Ben and Joe Weider’s leadership was central to founding the world’s premier bodybuilding organization, the International Federation of Bodybuilders (1947).

This intriguing history is not the only story this book has to tell. Professor Woycke’s draft of Esprit de Corps was completed at the onset of a debilitating illness. Following his death, friend and colleague Rod Millard discovered the manuscript in his papers and enlisting the aid of sport historian Dr. Craig Greenham prepared the draft for publication.  Unable to find a traditional publisher to take on this history, Professor Millard found a perfect partner in the university’s institutional repository.

“I have come to realize that it is going to have more readers through Scholarship@Western than it would have ever had in print.”

An excellent account of the Esprit de Corps story appears in Western News: Book a tribute to heft as scholar, weight of friendship courtesy of Jason Winders, Director, Editorial Services.