Agency is fundamental to everything we are and do. Thinking, doing, and making—Aristotle’s triad of generic activities—imply it.  Yet two reasons thwart inquiries that would make it the focus of inquiry. One is the difficulty of understanding a condition presupposed by the activity of specifying it: we examine ourselves while considering this fundamental aspect of our being.  Another is a complex of disputes that obscure this elementary issue.

Agency: Free Will and Moral Identity reduces confusion by emphasizing five principal oppositions.  The first—Cartesian subjectivism, or the Aristotelian idea that we live and move amidst other people and things—determines one’s reading of the other four: what are the bases for personal autonomy; how is autonomy constrained by socialization;  do we have free will;  are choice and action  perpetually inhibited by self-appraisal; how is moral identity anchored in free will? Agency’s responses are clarifying:

Are we agents engaged by other people and things, or is consciousness of them the occasion for thinking of ourselves?

Descartes emphasized that nothing is better known to minds than minds inspecting and appraising themselves. Aristotle emphasized the thinking, doing, and making of agents engaging other people and things.  Agency’s perspective is the one of Aristotle and C.S. Peirce.

Do we have autonomy sufficient to determine the manner and trajectory of our actions; or is each of us the creature of his or her social conditions, hence the clone of every person shaped by them?

Autonomy is socialized. We live and act among others while constrained by a common language, practices, loyalties, and laws.  Free will satisfies a discipline: we usually make ourselves responsible for choices that satisfy those limits.

Does each person have free will, or is every choice and action determined by a lineage of causes that reaches back to the origins of time?  There is no responsibility for one’s actions and effects if free choice is illusory because a causal tide has determined one’s every response.

Agency without free will implies that each of us is a vessel for the causal energies and vectors of one’s antecedents.  Arguments for and against this view are hundreds of years old, but they embody a nest of assumptions that are usually unexamined.  Is nature to be construed holistically so everything is related, directly or mediately, to everything else? Assume their independence, then imagine that Jack and Jill surprise one another as each accommodates the other, experimenting as they test one another.  We‘re surprised by situations for which we have no prior experience; we’re altered by information that changes old values or assumptions.  The discussion is often conceptual, though determining variables in the case of free will are Darwinian, empirical, and evolutionary.

Does one sometimes act freely and responsibly because of his or her character, calculations, and aims, or is appraisal a steady brake on action because imagination and choice are perpetually inhibited by the fear of violating personal or social scruples?

Autonomy is situated. Everything we do has constraining norms  and causes sufficient to produce it , but some of norms ae one’s own: we freely satisfy and sometimes violate or exceed them. This isn’t freedom without limits; it is a permission like Mill’s no-harm principle: do as you like and can up to the point of harming others.  There is also this essential corollary:  control yourself when you are close to that line.

Is moral identity founded in the personal evolution of one’s character, sensibility, and choices? Or is it the conceit of people who reliably behave as the privilege of their class or caste enables?

Moral identity is the achievement of agents who acquire a distinctive moral voice while satisfying the opposition that pits autonomy against socialization.

The book’s argument is historical and dialectical.  Emphasizing interiority,  sensibility, and initiative, but also collaborationand duty, it redeems our naïve  impression that freedom is more than an illusion. 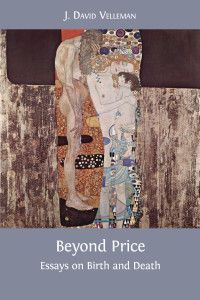 I was thrilled about the birth of my new grandson; yet as I held him, just a week after his birth, I wondered how he should feel about that event, or how I