Earlier this month the VSNU (Association of Universities in the Netherlands) announced a boycott of Elsevier – the largest academic publisher in the world – in protest at its stranglehold on the academic community.

The Netherlands’ commitment to OA is not without precedent: witness the State Secretary of Education – Sander Dekker’s statement in 2014: ‘Science is not a goal in itself. Just as art is only art once it is seen, knowledge only becomes knowledge once it is shared’.[1] Two Open Access targets were subsequently set in light of this declaration: 40% of scientific publications were to be made available in Open Access by 2016, and 100% by 2024.[2]

The chosen format is to be Gold Open Access, the direct publication of articles in Open Access Journals. These articles would therefore be ‘born Open Access’ without cost to readers and without subscriptions – the cash-cow of publishers like Elsevier. However, questions have nevertheless arisen as to the long-term sustainability and scalability of immediately adopting Gold OA, many of them well-founded.[3]  We must therefore look into the pragmatic realities of Gold OA and how if the boycott is successful its adoption would likely play out.

As many OBP readers are no doubt aware the prices for academic journal subscriptions are, generally speaking, excessive and frankly gratuitous, bloated by inessential extras and in times of recession too great to bear.[4] According to Elsevier’s Annual Report, the Scientific, Technical and Medical publishing revenue (STM) for 2014 was £2,048 million with an operating profit of £762 million (a profit margin of 38%).[5] A lot of this ultimately derives from taxpayer-funded research.[6] Additionally, it is worth noting that the price for scholarly journals has consistently risen faster than the consumer price index over the last several decades.[7] Deep-felt resentments within the academic community at this unjust state of affairs have given traction to the Open Access movement. Moreover, much criticism has been directed at the absurd nature of the current journal publication system and how, in favour of more ‘well-known’ names, young academics are having the publication of their own material severely delayed. Therefore, the fight for OA is not only to save money but also to democratise knowledge. As things stand, these shifts in publishing are not a matter of if but a matter of when and of how much people are going to pay in the meantime. Knowing this, it is not surprising that companies such as Elsevier have laid roadblocks in the way of OA publishing.

Before discussing Gold OA in greater depth, one distinction must first be made, namely that between Gold and Green OA. Open Access has been defined as ‘immediate, permanent, toll-free online access to full texts of peer-reviewed research journal articles’.[8] But whilst Gold OA refers to the publication of Open Access Articles in journals, Green OA refers to the practice of immediately self-archiving articles in an institutional Open Access repository. Furthermore, the oft-cited examples of successful implementation of Gold OA, CERN and SCOAP3 (The Sponsoring Consortium for Open Access Publishing in Particle Physics), must be seen within their specific contexts. Of the two perceived routes to OA, the Gold is much more radical and has thus struggled to gain momentum over recent years. Conversely, the Green path is a more gradual (and so less glamourous) path, but nevertheless provides a stronger foundation as well as costing a fifth of the price.[9] In the cases of publications by CERN and SCOAP3, their success in Gold OA was built upon a total commitment to Green OA and 100% self-archiving prior to their switch. This fact has been largely overlooked and their example rarely imitated. Within the traditional publishing model, one of the key costs for institutions is the archiving of articles by companies such as Elsevier, Springer or Wiley. However, through total self-archiving (Green OA) these costs can be avoided. It is for this reason that a number of major publishers have embargoed Green OA, understanding its threat to revenue.[10] Consequently, this issue has been labelled by some as the real battleground for OA.

In the case of the Dutch universities it is due to the absence of pre-existing Green OA self-archiving that the desire for Gold OA can be seen as pre-emptive – e.g. like a political revolution without the cultural change to solidify it. This has thus spawned the popular term “Fool’s Gold”. Moreover, through linking Gold OA with traditional subscriptions in ‘hybrid’ journals publishers have been able to further increase their profits and delay the transition to “Fair Gold” through Green OA. Indeed, theoretically speaking, if Green OA were to reach or come close to 100% coverage globally, many institutions would be able to cancel their costly journal subscriptions and thus force publishers to downsize to the management of the peer-review. Only then would Gold OA function to full effect and surpass Green OA in its net benefits.[11]

In 2012 the UK government capitulated to pressure from legacy publishers – “Under the palpable influence of ponderous (and successful) lobbying by the publishing industry –[it] recommend[ed] that the UK should phase out extra-cost-free Green OA self-archiving in institutional repositories and instead pay publishers for Gold OA out of scarce UK research funds, as recommended by the Finch Report”.[12] It is worth noting at this point that the universities in the UK “are paying unprecedented amounts in Article Processing Charges on top of their subscriptions” due to this.[13] Luckily, on the ground level this motion has been largely ignored in favour of mandating Green OA as per the “UK Select Committee’s historic recommendation in 2004”.[14] Nevertheless, the closeness of government to big business has been, as it generally is, counterproductive to the needs of its constituents. One can only hope that for emerging nations these problems can be avoided rather than entrenched.

To conclude, from what we have seen, the state of affairs is clearly complex. However, a few things have nevertheless made themselves apparent. Though I would agree that Gold OA on a global scale is the ultimate goal of the OA movement, it is clear that we have a long way to go before we could implement a non-pre-emptive switch. Nevertheless, I wish the VSNU the best of luck in their national boycott and hope this is a precursor of things to come. 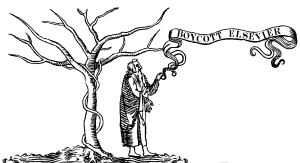 Image sourced from “it is NOT junk” by Michael Eisen