Here are our cost and revenue figures. As also reported at the OASPA conference, they are for the 12-month period from 1 September 2014 to 31 August 2015. Being based in the UK, our accounts are actually denominated in British pounds, but to ease international comparison I have reported everything in US Dollars. As I mentioned in Part One, the most interesting and exciting aspect of Open Access publishing is, I believe, the ability to reduce the costs of academic publication and distribution. After all, that is what the Internet was invented for!

In Figure 5 I show the allocation of those costs across categories, with the numbers showing the average expense per title (that is, the total figure divided by 18). 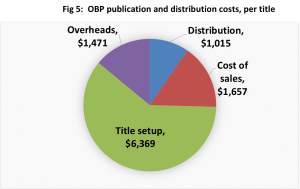 Note that the cost of sales is primarily the printing cost of the books purchased (using Print-on-Demand means we keep no stock), but it also includes other sales-dependent costs – such as the costs of receiving credit card sales from our website. The distribution cost is primarily the discount provided to wholesale print and ebook distributors and to third party retailers. Overheads cover rent, website maintenance and conference expenses. Title setup is a catchall for everything else – including all staff costs – as that is our primary day-to-day activity, but I should note that some of this time is also spent in R&D, developing innovative products and systems, which should probably be more accurately included in overheads.

In Part One of this blog trilogy, I estimated the costs of production and distribution of monographs by legacy publishers to be around $15k each. The comparison with our own costs as estimated in Part One are stark. $1k for distribution, $6.5k for ‘first copy’ title setup costs.

How can I explain these differences? Well, maybe that is something for the legacy publishers to answer rather than me! But I suspect there are two primary reasons for the lower distribution costs:

Our revenue for the same 12-month period was $198,000 – just exceeding our costs (whew!). This satisfies our break-even objective: as a non-profit organization, all profits are reinvested into the production and distribution of books.

There are four primary sources of revenue for OBP:

A breakdown of revenue between these four sources is shown below. 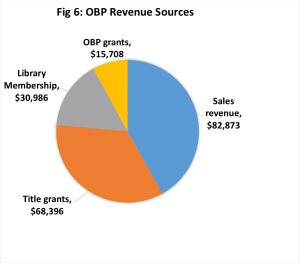 Figures 7a and 7b show the distribution of sales and sales revenue between the various editions we retail. Clearly, paperback sales remain our most important retailed edition. The various ebook editions constitute about 1/4 of our total sales – with the single biggest source for these being sales on Amazon Kindle. But we don’t charge very much for our ebooks ($2.99 – $9.99), so their contribution to overall sales revenue is understandably lower. 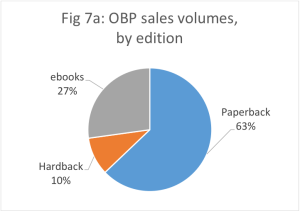 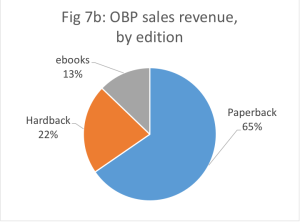 Figure 8 shows the average monthly sales per title, taken over the last 12 months, by year of publication of the title. Unlike the similar plot for online readers (Fig. 2) this does show a fall off in sales with the age of the publication, as reported for legacy publications. Titles published before 2011 sold on average one copy per month over the last year, while titles published in 2015 have sold on average over 18 copies per month. These figures suggest that total sales over a ten-year period will, on average, exceed 500 (mean) and 200 (median) – broadly in line with estimated sales figures of 200-400 for legacy publications. Overall it seems that we are selling roughly the same number of books as legacy publishers. 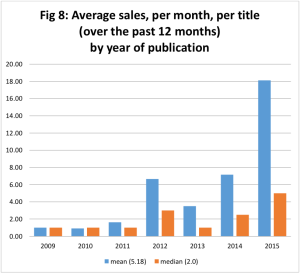 It should be noted though that our prices are significantly lower than the prices charged by legacy publishers (typically around $30) – and it is likely that the make-up of our customers is also quite different. I suspect that we are selling a significantly lower proportion of our works to university libraries. Many libraries, particularly in the US, maintain “standing order” purchasing plans for all volumes within a publisher specific “book series”. Our experience is that it is very difficult to get uptake from libraries for new series from non-traditional publishers (such as OBP) – so legacy publishers with established series have a significant advantage over newer publishers in generating sales to university libraries. But I have no direct evidence to support that conjecture.

The proportion of total sales to libraries has important implications for pricing and revenue strategies. Library purchasing decisions are typically not very responsive to price, so publishers attracting a large proportion of library sales are able to select higher prices without losing sales. This, almost certainly, is the rationale legacy publishers apply in selecting their high pricing strategies.

But it is worth noting that in assessing legacy vs start-up ‘business models’ (at least in the short to medium term) there is likely to be a big difference between the revenue sources required by new initiatives, without an established base of sales to libraries, and legacy publishers with that established base. If libraries are more reluctant to subscribe to publications from new Open Access initiatives than they are to maintain existing subscriptions to established “series” that convert (or partially convert – as seems far more likely, for precisely this reason) to Open Access publishing, then legacy publishers will be able to sustain larger revenues than newer publishers from sales alone. Put another way – non-sales revenues are likely to be much more important for new Open Access initiatives than for legacy publishers.

So what are the main lessons we can take away from these cost and sales figures?

I started this trilogy of blogs by arguing that the legacy publishing model made for a good business model, but was inadequate as a distribution model for academic scholarship. I hope I have now justified those claims.

At OBP, this past year, our titles have sold roughly the same amount as legacy publications – but we have attracted about 100 times as many readers to those titles, with over half of those readers coming from outside the English-speaking academic powerhouses of the US & UK.

In addition, without compromising quality we have embraced many of the new possibilities that digital and Open Access publishing provide, introducing a range of innovative and award-winning titles that are pushing the frontier of what is possible, and what will surely become expected, in an academic publication. I am very proud, but staggered, that with our minuscule budget, OBP has produced more Open Access publications, and more innovative scholarly monographs, than all of the “big four” academic publishers combined!

OBP is just one Open Access publishing initiative, and many other really exciting initiatives exist and are emerging. But I hope that our experience at OBP demonstrates that Open Access monograph publishing is not just viable, but absolutely essential if we are serious about disseminating scholarly findings and knowledge. Open Access book publishing is effective, cost efficient and sustainable.

Return to Part One here and Part Two here.